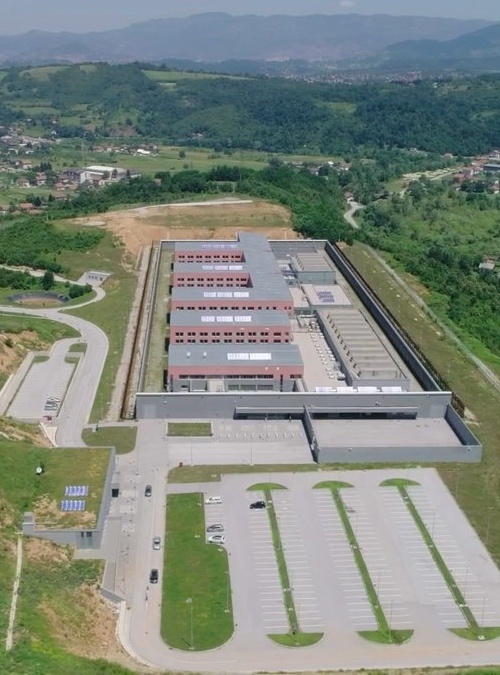 The first high security prison in Bosnia and Herzegovina, fully compliant with European Prison Rules was officially opened on Wednesday 22 July in Vojkovići, East Sarajevo. Throughout the construction process the European Union provided financial, political and technical support to ensure project completion and that the functioning and maintenance is in line with EU standards of modern correctional facilities. The project will significantly contribute to the efficient implementation of the judicial reform in Bosnia and Herzegovina.

The EU provided €9.15 m from IPA funds and €2.5 m through the Western Balkans Investment Framework (WBIF). An additional €19.2 m was financed through a loan from the Council of Europe Development Bank (CEB), and the remaining funds for the completion of the project were provided by Sweden (€2.1 m), the USA (€0.2 m) and national contribution of BiH (€6.4 m). CEB provided an additional €0.3 m grant for the staff training.

This is the first state-level prison in BiH with the maximum security capacity of 348 places, of which 298 for prisoners and 50 for detainees. According to the systematization, the state prison will employ about 280 staff and will be fully operational in autumn. The prison complex covers an area of 24,000 m2, and each cell (hosting one inmate, but there are also double occupancy cells) has an area of 12 m2, with en-suite facilities, including several for disabled access.

Inmates will have access to training/education (workshops, computers, and library) as well as sports rooms, with the purpose to assist with their reintegration into society once released. They will also benefit from the medical care unit on site, with doctors and health-care workers employed.

The construction and operation of the state prison is in line with European prison rules and standards, which significantly relieves the capacities of the entity prison capacities and will alleviate the overbooked prison system and contribute to better re-socialization of perpetrators.

The efficient work of the State Prison will support the work of other judicial organisations, ensure that inmates are held securely and contribute to the improvement of citizens’ safety and their perception of the justice system in the country.

Ambassador Johann Sattler, Head of the Delegation of the European Union to Bosnia and Herzegovina and EU Special Representative in BiH: ’Strong rule of law is the alpha and omega of the European integration process and the opening of this important facility will contribute to the reinforcement of rule of law in Bosnia and Herzegovina. The European Union has invested significant resources in improving the infrastructure of judicial institutions throughout BiH.’

Johan Norqvist, the First Secretary of the Swedish Embassy in BiH: ’The result of the work of many dedicated people is a high security prison that adheres to EU prison rules and standards. For a long time, inmates were held in overcrowded and outdated entity prisons which are not suited to securely incarcerate and rehabilitate. The state prison should resolve serious issues burdening the BiH justice system, improve the country’s international reputation and help increase confidence in the justice system.’

Josip Grubeša, BiH Minister of Justice: ’The opening of the State prison is our strategic priority and an important part of overall justice system reform. Thanks to the engagement and work of everyone involved in this project we are able to be here today and open this extremely important facility. The staff will begin work and training in August and we hope that first inmates will be transferred here in the autumn.’

More about the WBIF activities in Bosnia and Herzegovina here.

Photos from the opening ceremony here.