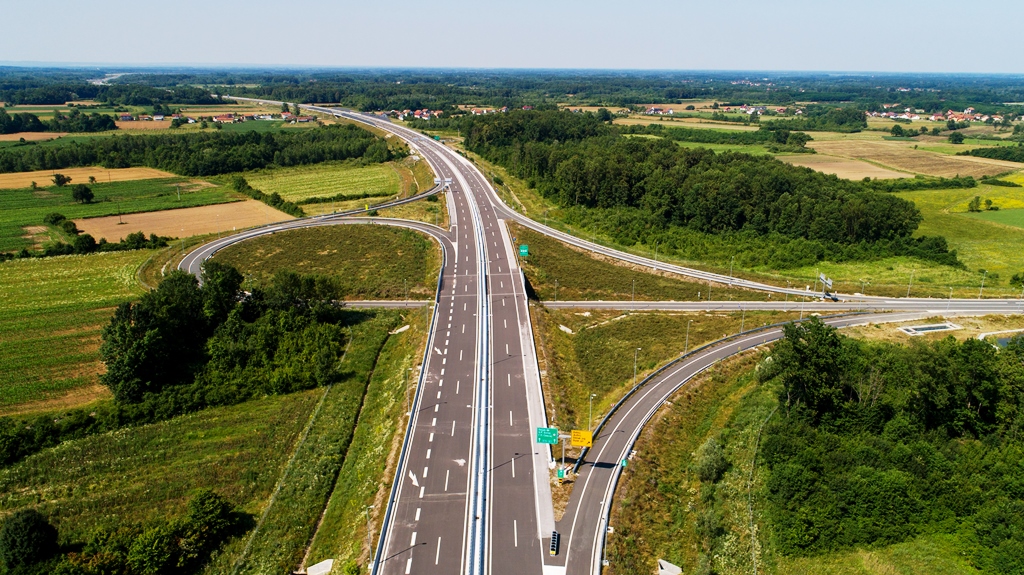 Corridor Vc in Bosnia and Herzegovina, the road of Europe

Home / Corridor Vc in Bosnia and Herzegovina, the road of Europe
Print To PDF

Over 1.5 million people, living along the Corridor Vc (CVc), connecting the north and the south of Bosnia and Herzegovina, witness their accessibility being improved thanks to the contribution of the Western Balkans Investment Framework into this transport pillar. The Corridor Vc in Bosnia and Herzegovina is the first major motorway and the largest ever infrastructure project in the country´s history. More than 68 km of motorway, including 1 cross-border bridge, have been supported by EU grants, blended with loans by European Bank for Reconstruction and Development (EBRD) and European Investment Bank (EIB). These investments are contributing towards faster economic and social development of the country.

The road network in BiH covers more than 8,000 km, of which over 1,000 km are European routes that connect the Adriatic Sea coast with Central and Northern Europe. Bosnia and Herzegovina is a key segment for the inclusion into the Trans-European Transport Network (TEN-T). 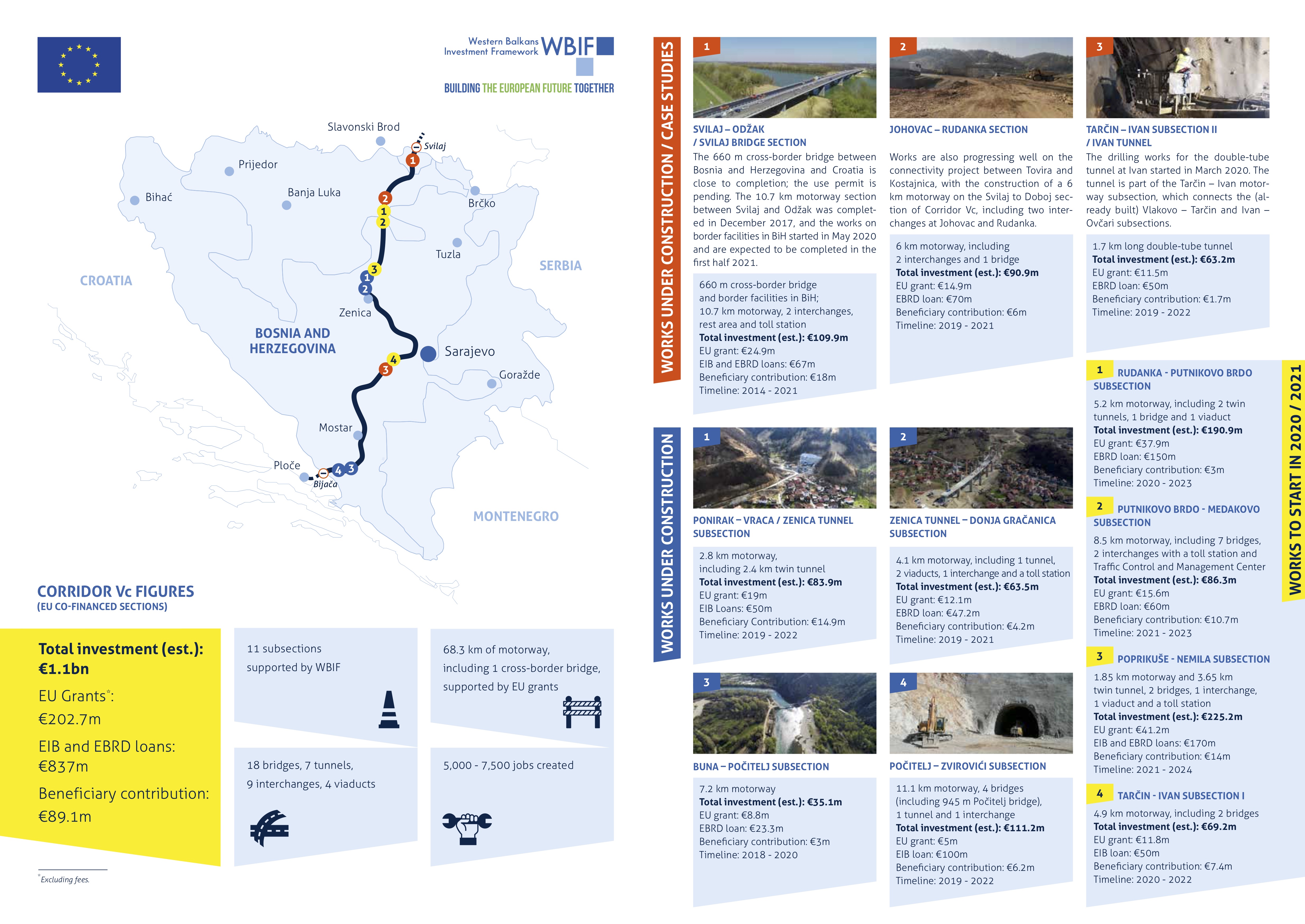 The Corridor Vc consists of a major north-south transit road between the countries of the region through Bosnia and Herzegovina. Following the TEN-T Mediterranean Corridor extension to the Western Balkans, the CVc starts in Budapest, runs via northern Croatia (Osijek), through Bosnia and Herzegovina via Doboj, Zenica, Sarajevo and Mostar, and ends in the Croatian port of Ploče.

With increasing pressure on the infrastructure through high daily average traffic volumes, as average it grew to over 9,700 vehicles, and a corresponding increase in freight volumes, Bosnia and Herzegovina with its neighbours embarked on an ambitious motorway construction programme. The Corridor Vc is the backbone of the country´s connectivity, strategically vital for its economic development and hence, a top priority for the Western Balkans regional development. 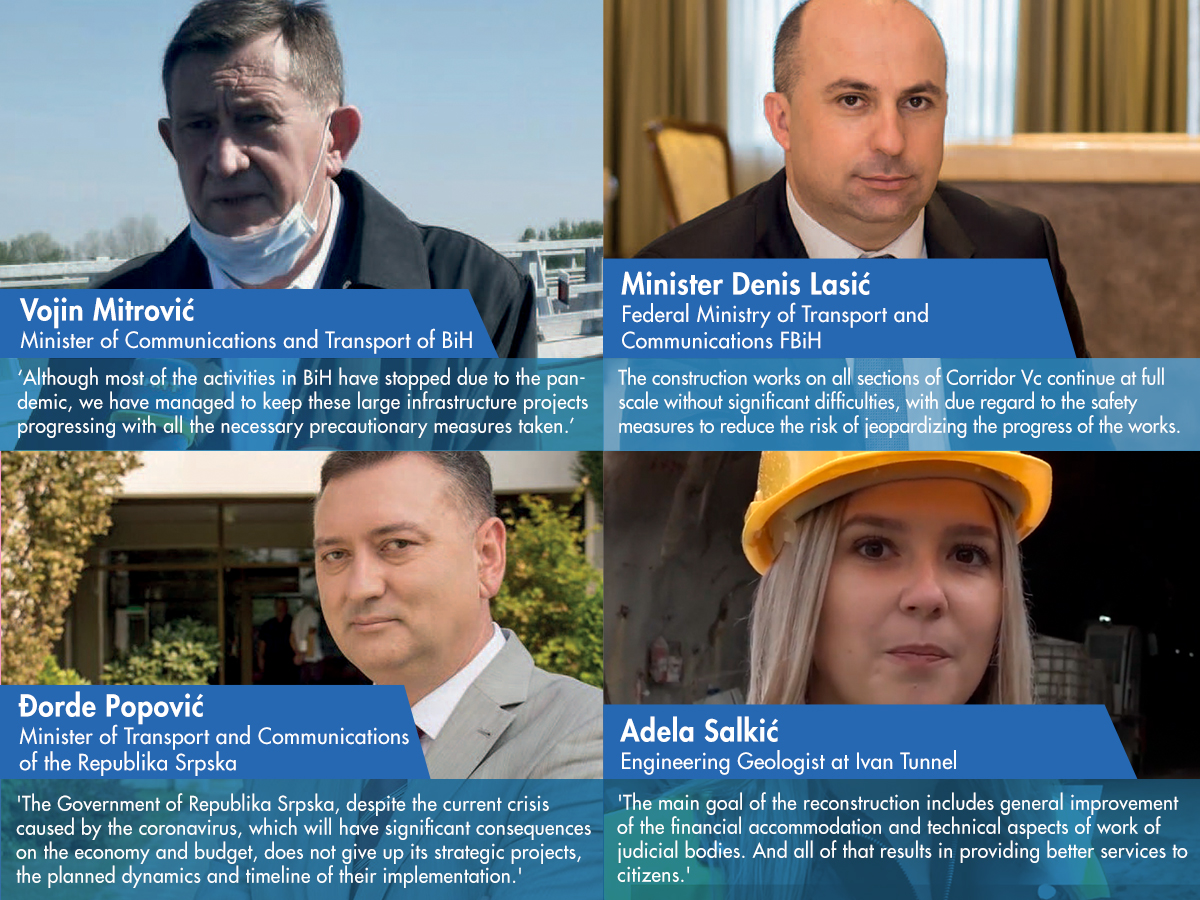 More than 325 km of Corridor Vc run through BiH, the first major motorway and the largest ever infrastructure project in the country´s history. The route accommodates 2x2 traffic lanes and speeds of 130kph. In practical terms, for a typical journey from Sarajevo to the sea, that now takes three and a half hours, in a few years it will be reduced to two hours. However, in the transport sector - as in the car industry - speed is not all. The new infrastructure is expected to reduce road accident rates and operational and maintenance costs for motorway operators and users by more than 7%.

The WBIF has actively supported the development of this corridor since the start of the preparation works back in 2014. It has mobilised technical assistance grants for project preparation as well as EU investment grants and loans (provided by the European Investment Bank and the European Bank for Reconstruction and Development) in for the construction of the various corridor sections. These investments are contributing towards faster economic and social development of the country by creating a quicker, safer and more reliable long-distance transport link with the country`s key export markets. In addition, Corridor Vc will contribute towards faster social and economic integration of the Western Balkans and the European Union.

The construction works on all EU-supported sections of the new transport artery in Bosnia and Herzegovina continue to transform rugged terrain into a modern, sleek highway despite the economic and social difficulties of the COVID-19 pandemic. Uninterrupted work on this major regional highway has been possible thanks to precautionary measures set up by authorities in Bosnia and Herzegovina and the contractors, who introduced rigorous safety protocols and protective equipment. The aim of these efforts is to keep operations going, retain jobs and ensure regular incomes for the people engaged on this project. 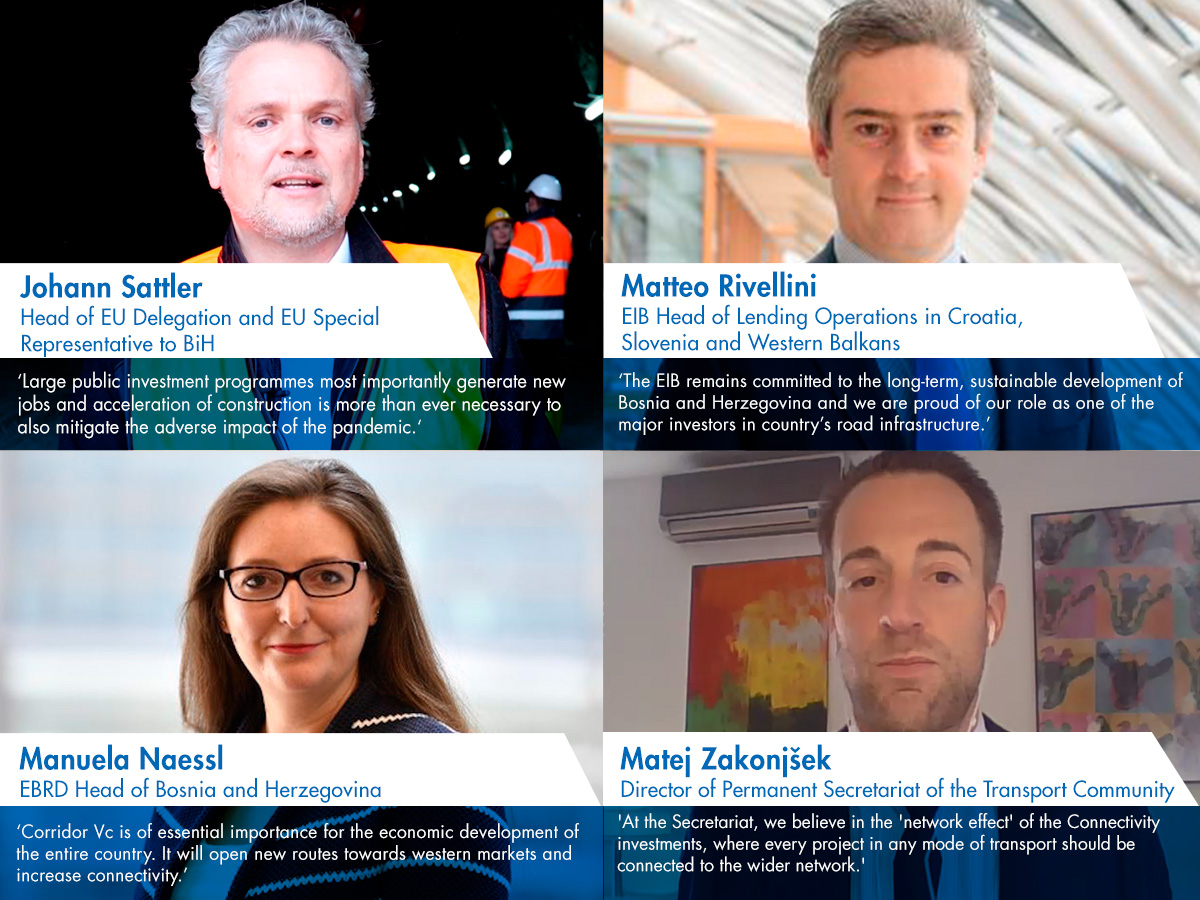 Connectivity Agenda for the Western Balkans

The Western Balkans have made the connectivity agenda one of their highest priorities, with a special emphasis on the preparation and financing of concrete regional infrastructure investment projects and on the implementation of technical standards and reform measures (e.g.: aligning/simplifying border crossing procedures, railway reforms, information systems, road safety and maintenance schemes, unbundling and third-party access).

For this purpose, the European Commission set aside up to €1 billion in grants until 2020, from the EU Pre-Accession Instrument, to support the connectivity agenda. These grants will leverage €4 billion in investments and create more than 45,000 jobs. 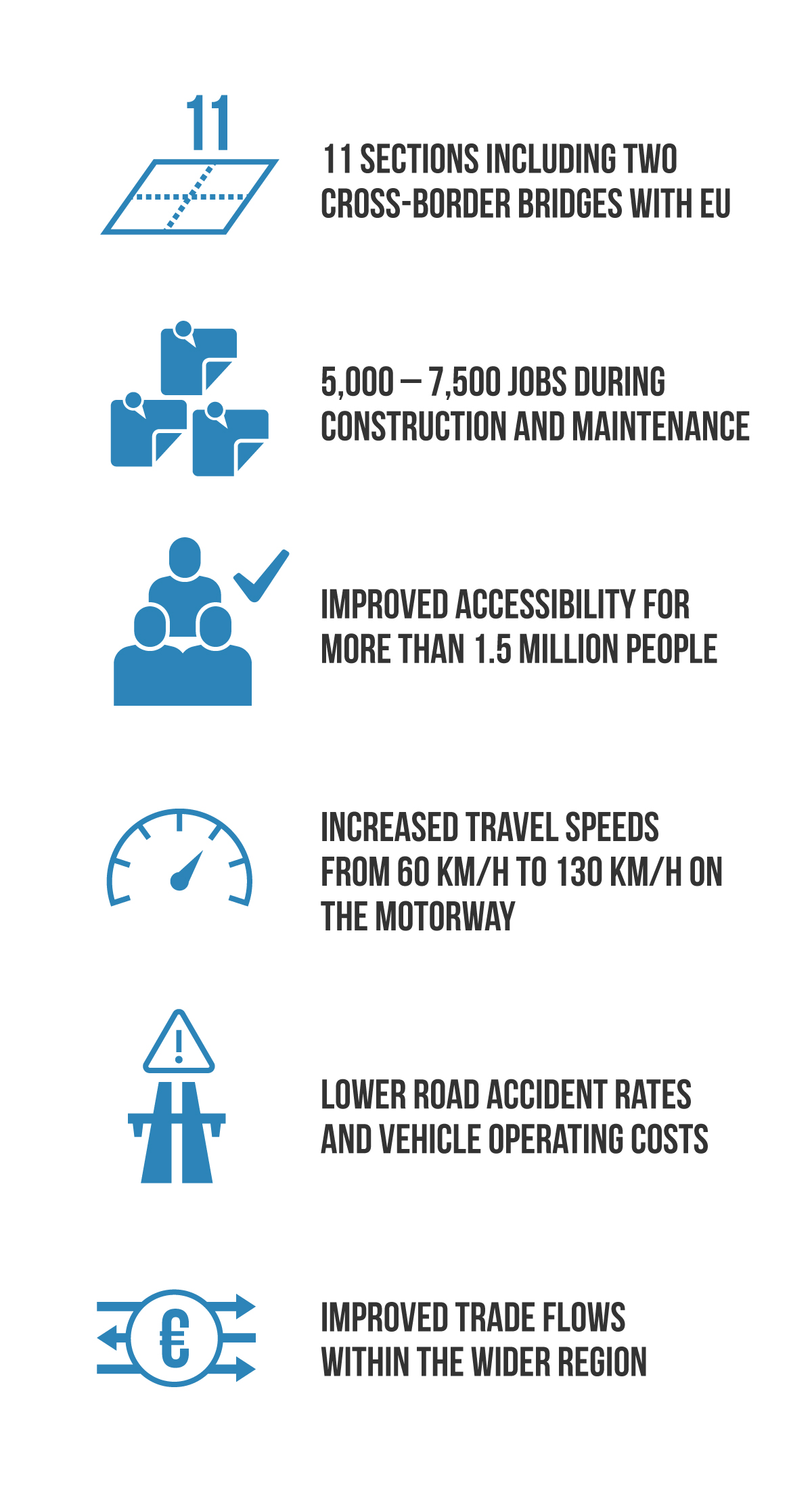 The Corridor Vc is the backbone of Bosnia and Herzegovina´s connectivity, strategically vital for its economic development and a top priority for the Western Balkans regional development. 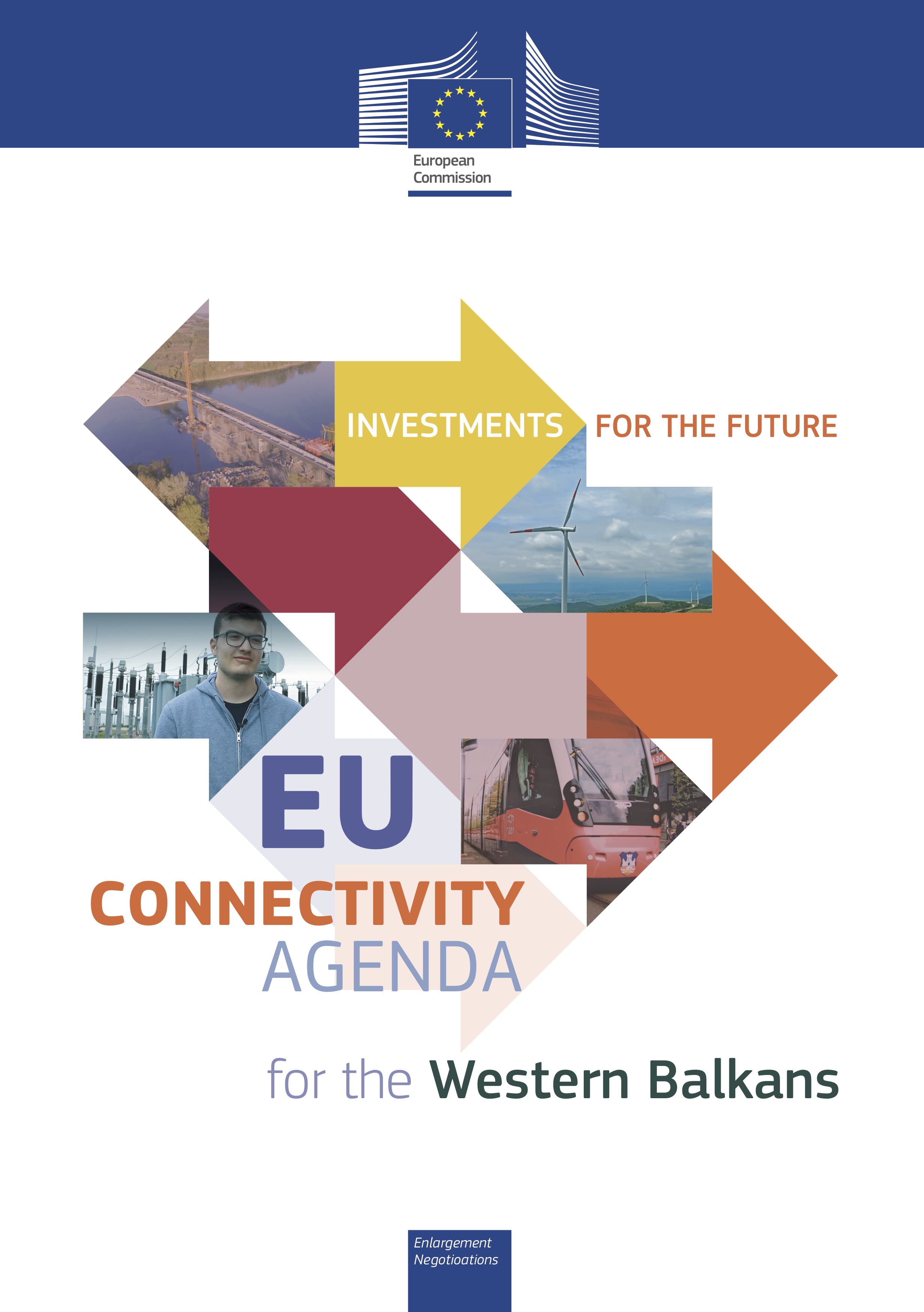