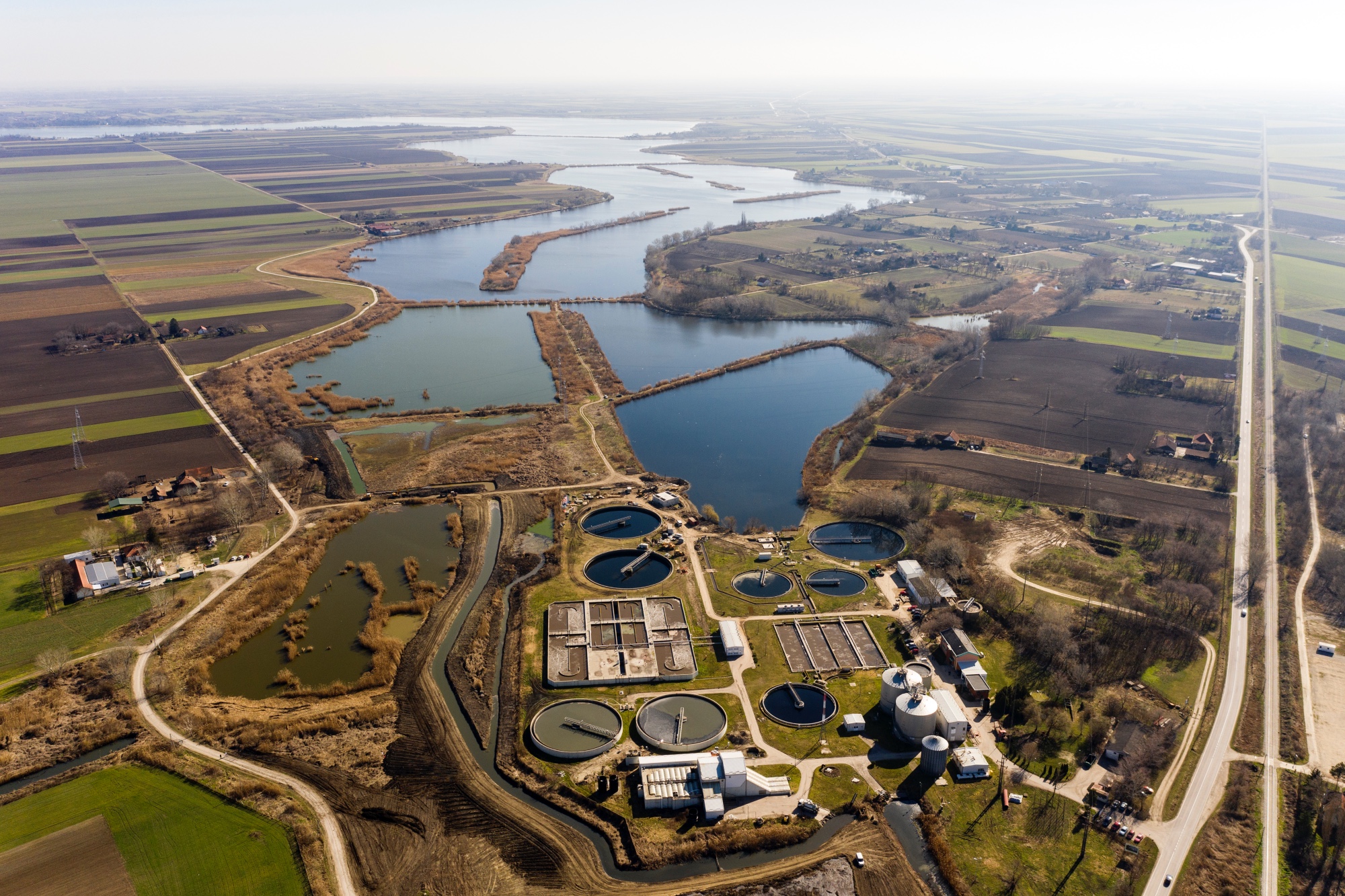 It was a prescient investment. Fifty years on, Subotica is still one of the few cities in Serbia with proper wastewater infrastructure. Less than 10 per cent of the country’s wastewater is treated and remedying this is expected to be one of the most critical and challenging areas of investment for Serbia as it advances its European Union integration.

Subotica started work on its environmental infrastructure in the 1970s, when the city’s growing industrial activity started to threaten nearby Lake Palić. There was no system for collecting wastewater from the industrial facilities, so the effluent leaked directly into the lake, harming its biodiversity. The city’s decision to build a wastewater treatment plant helped prevent further pollution in the two decades that followed. It was not a permanent solution, however.

The WBIF project "Water supply, wastewater collection and sludge management in Subotica" has been identified as one of the Flagships within the Investment window „Environment and Climate" in the Economic and Investment Plan for the Western Balkans 2021-2027. These projects concern sustainable and reliable ways of managing water supply, waste water and waste disposal, crucial for the protection of the environment and of the health of citizens.

“The wastewater plant was problematic for two reasons,” explains Imre Kern, Deputy Mayor of Subotica. “It didn’t remove phosphorus and nitrogen and it didn’t have enough capacity.”

The upgrade helped to improve the quality of Subotica’s wastewater disposal and treatment services. It also allowed the city to connect another 12,000 of its 140,000 citizens to the sewerage network, bringing coverage to 60 per cent of inhabitants. In addition, the new wastewater plant has the technological capacity to produce energy from waste and currently produces 25 to 40 per cent of its own energy needs.

“We achieved our most important goal, to reduce the concentrations of nitrogen and phosphorus to the prescribed limits, which significantly improved the quality of water in the lake and helped preserve its biodiversity,” continues Deputy Mayor Kern. 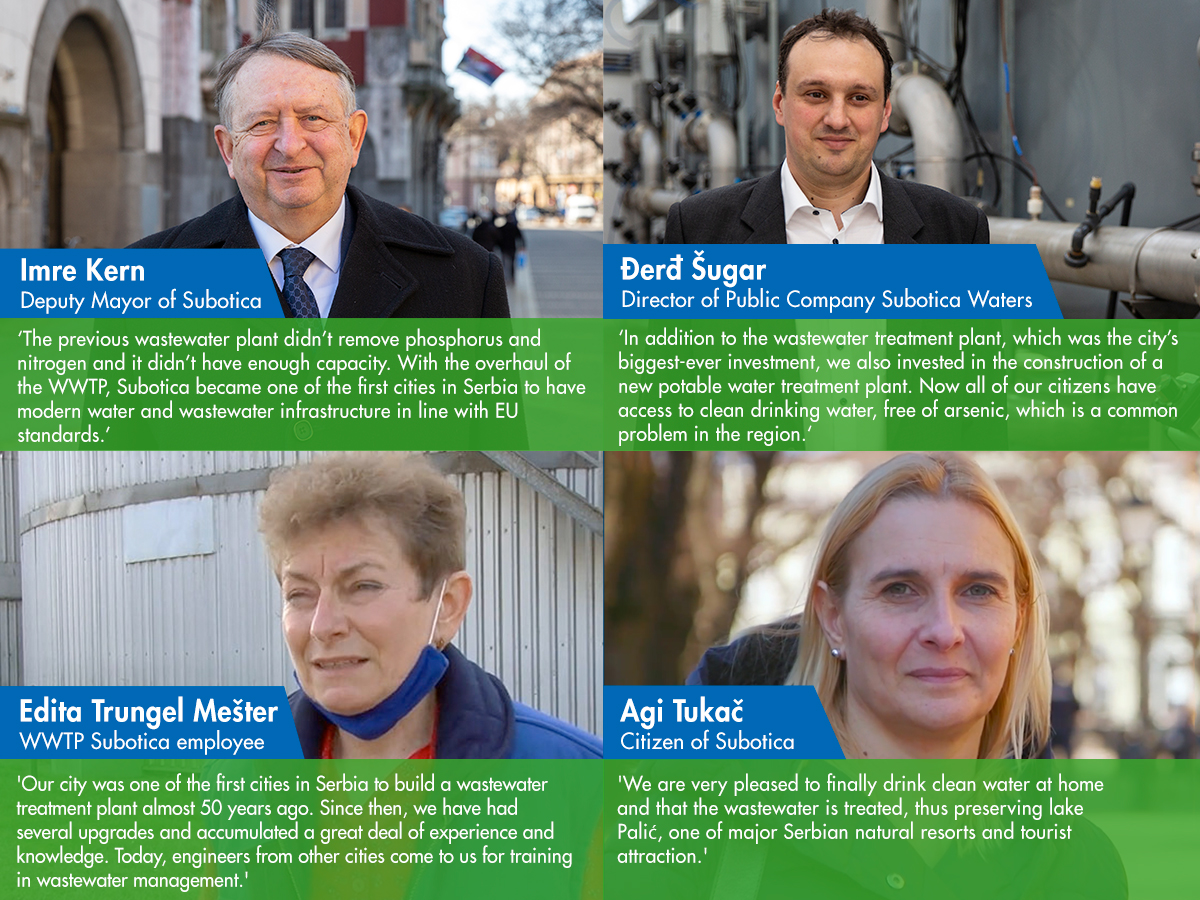 The city continued to invest in its water services and, in December 2020, opened a new drinking-water treatment plant.

“In addition to the wastewater treatment plant, which was the city’s biggest-ever investment, we also invested in the construction of a new potable water treatment plant,” explains Đerđ Šugar, director of Subotica Waters (JKP „Vodovod i kanalizacija“ Subotica). “Now all of our citizens have access to clean drinking water, free of arsenic, which is a common problem in the region.”

“There has never been a stronger momentum to invest in green infrastructure than today. It is a global and European priority. It has now become a top policy priority in Serbia. Hence our strategic focus is to scale up and accelerate investments,” says Zsuzsanna Hargitai, Former EBRD Regional Director for the Western Balkans and Head of Serbia. “80 per cent of our forthcoming infrastructure projects are green investments. The time has come to upgrade national and municipal environmental services and create a healthier environment already for the current generation of citizens. ”

“This is another milestone in Serbia becoming greener, protecting its citizens and fostering a brighter future,” says Martin Klaucke of the Operations Section of the EU Delegation to Serbia. “European integration for Serbia is not an abstract thing; it is something people can see and feel in their own homes through cleaner and safer water for them and their children. Protecting the environment means protecting the people. That is what the EU is about: a better life for the people.”

Elisabeth Gruber, Head of Department at the Austrian Federal Ministry of Finance, and chair of the WBIF Bilateral Donors, says: “The WBIF bilateral donors are pleased that their grant support has contributed to the realization of this important project. We are convinced that it will yield a lasting positive impact by safeguarding the health and welfare of citizens and protecting their natural environment, in the sense of comprehensive, sustainable municipal systems and services.” 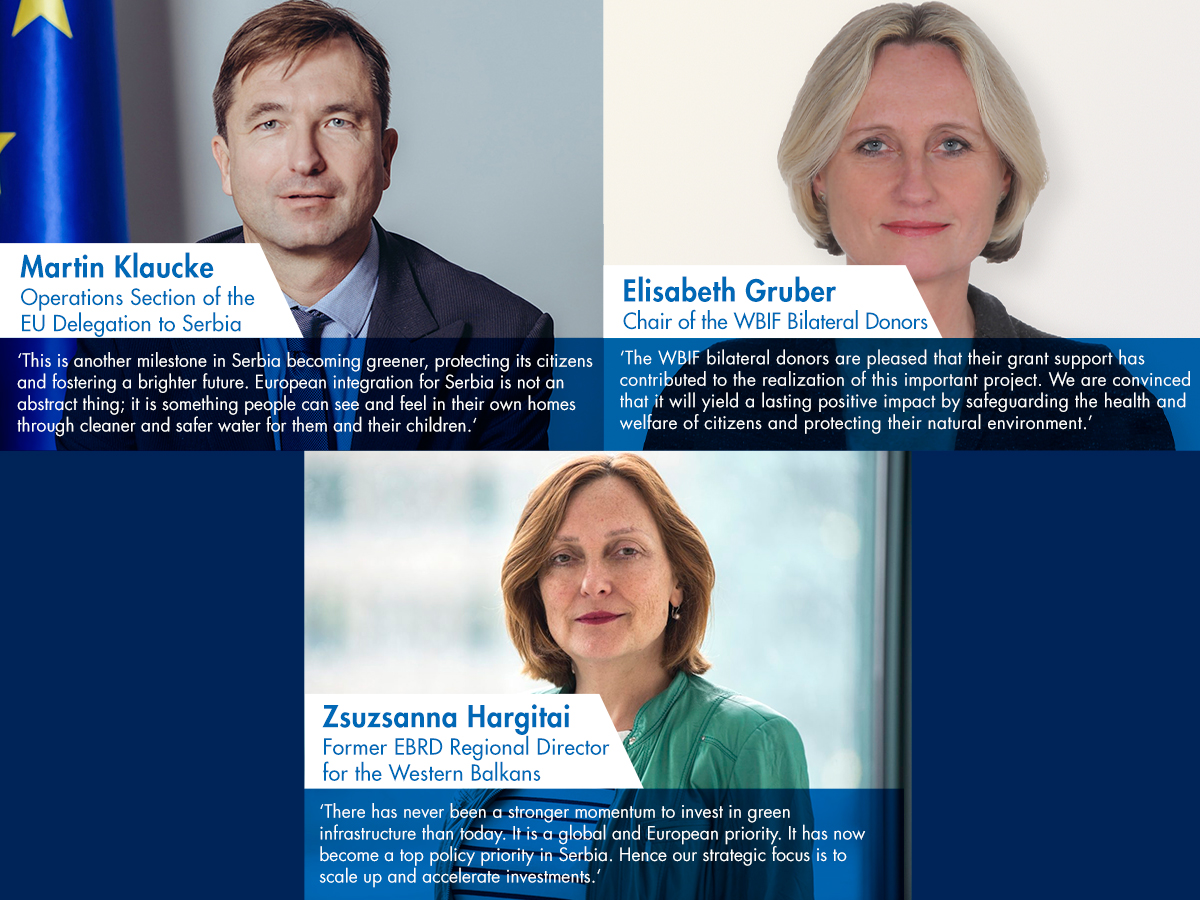 The European Union and the bilateral donors, the Western Balkans Investment Framework (WBIF) and the European Bank for Reconstruction and Development (EBRD), have been supporting Subotica’s efforts for the modernisation of its original waste water treatment plant and construction of a sludge line since 2006. The City continued the upgrades by extending its sewerage network and constructing collectors and additional water pipelines.

The overall investment consisted of two stages: In the first stage, the waste water treatment line and sludge line were financed by the EBRD loan in the amount of €9 million, an EU grant of €5 million (CARDS 2004), a €0.6 million bilateral donor grant from Italy, while the City of Subotica contributed €3 million and Public Water Management Company Vode Vojvodine contributed with further €0.45 million.

The second stage of the project that benefited from the WBIF support resulted in the construction of collectors toward facilitating better use of the capacity of the existing WWTP and provide support for the project preparation, tendering procedure and supervision for their construction. In addition, a feasibility study was prepared for the construction of a sanitary landfill and a composting plant to help with the management of increasing quantities of sludge from the WWTP.

The total value of the WBIF supported investment is €24.6 million, financed through the WBIF Bilateral Donors' grant of just over €2 million, a €11 million loan from the EBRD, plus a beneficiary contribution of more than €10 million.

The Economic and Investment Plan for the Western Balkans 2021-2027 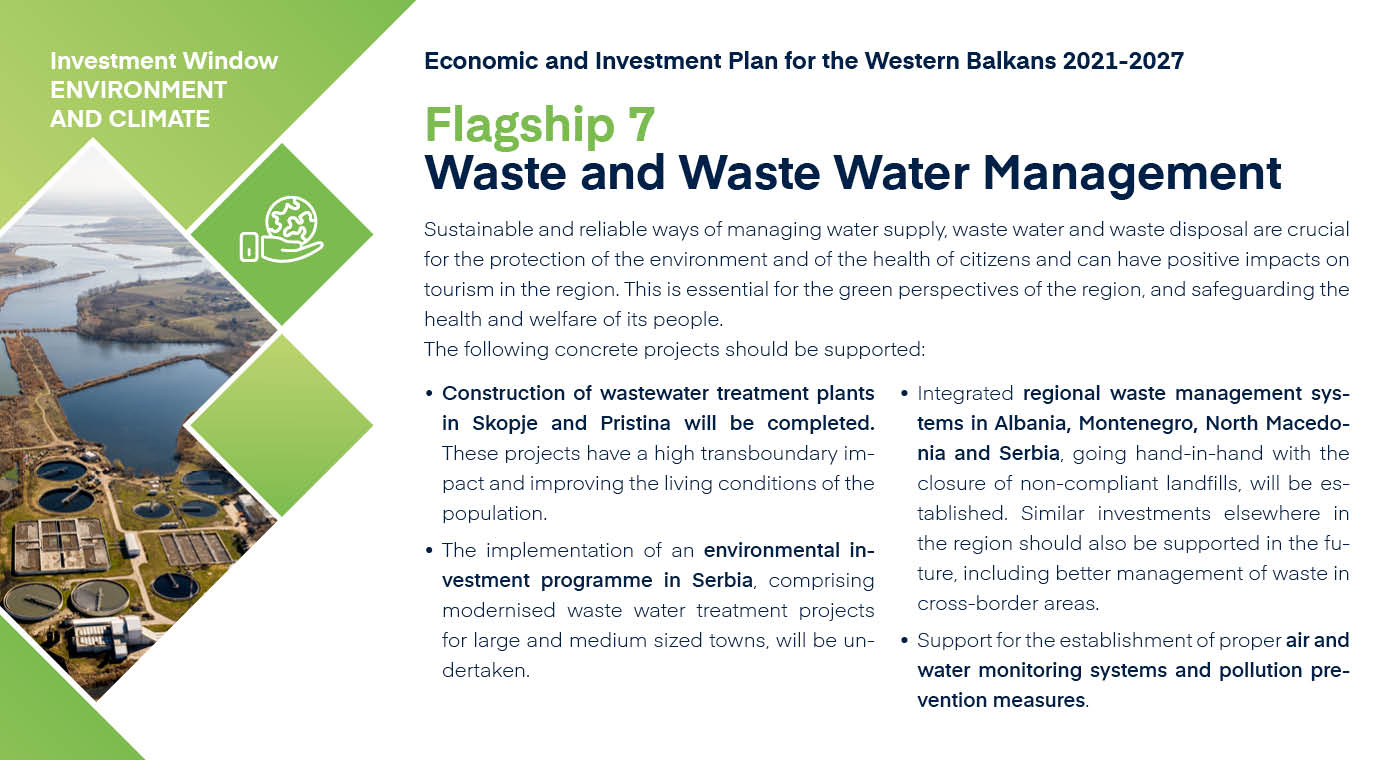 Imre Kern, Deputy Mayor of Subotica: “With the overhaul of the wastewater treatment plant, Subotica became one of the first cities in Serbia to have modern water and wastewater infrastructure in line with EU standards.” 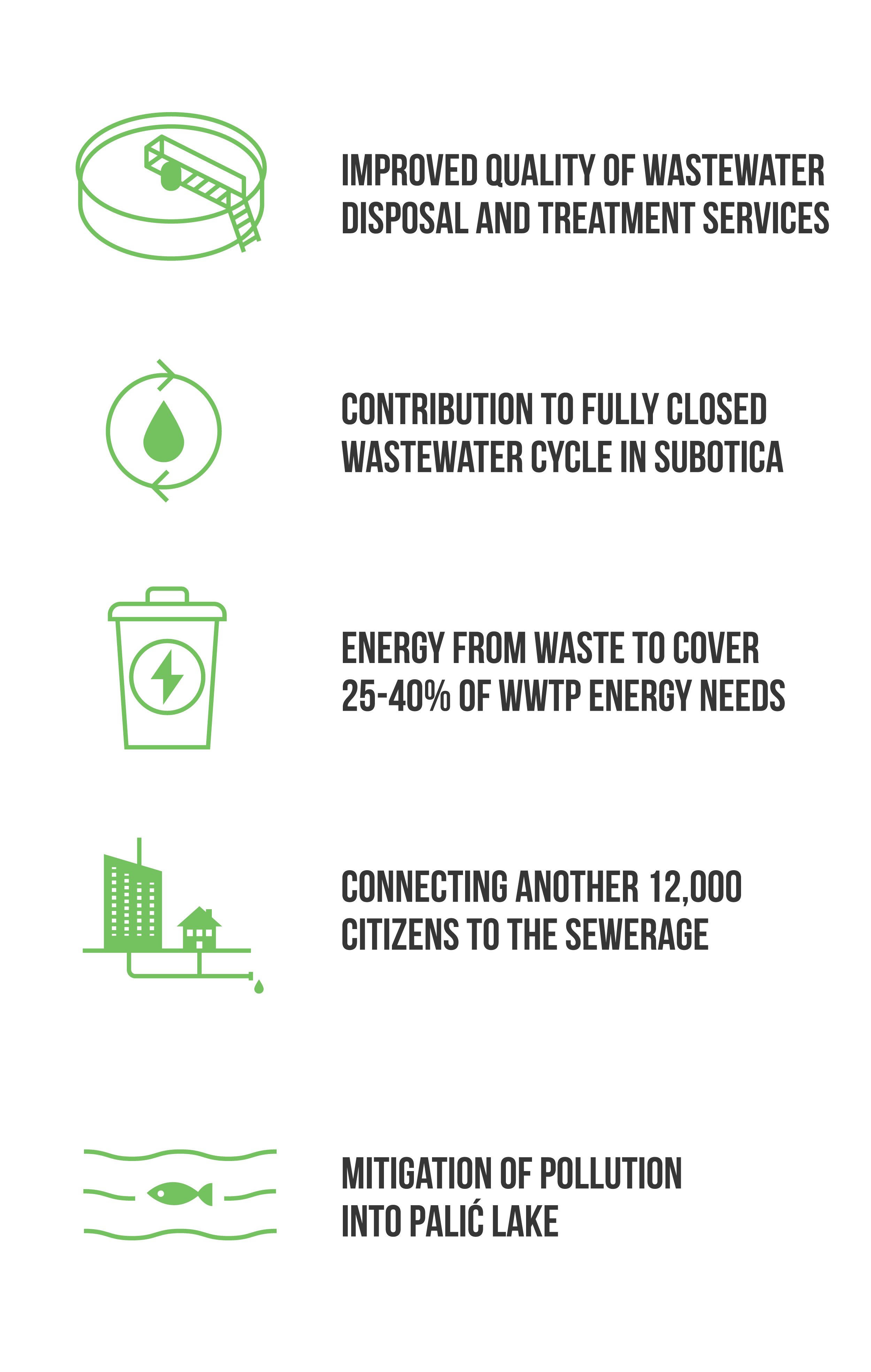