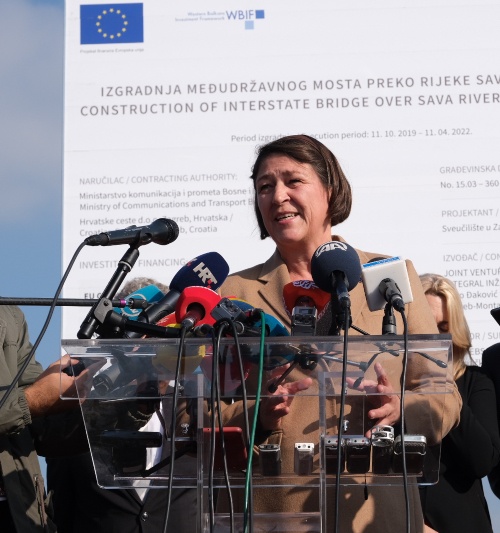 Works Commence on the 2015 Connectivity Project for Gradiška Interstate Bridge

Works commence on the interstate bridge between Bosnia and Herzegovina and Croatia at Gradiška, with Commissioner Violeta Bulc, Ambassador Johann Sattler, and BiH Presidency Member Milorad Dodik in attendance. This is the second cross-border bridge over the Sava co-financed by the EU through the WBIF under the 2015 Connectivity Package.

The new bridge will be completed in 30 months and will ensure a vital transport link between Bosnia and Herzegovina, Croatia and the wider European road network. The EU has provided €6.8 million in grant to cover 18% of the costs, while the remaining is financed through a loan concluded with the European Investment Bank and the beneficiaries' joint contribution.

The investments will create more than 300 jobs during the construction and operation of the newly built facilities and will significantly reduce waiting times at the border. They are designed to facilitate trade, regional integration and sustainable growth and thus have a positive impact on the broader economy of the two neighbouring countries.

On the occasion of the start of works, Bosnia and Herzegovina and the European Commission maintained: