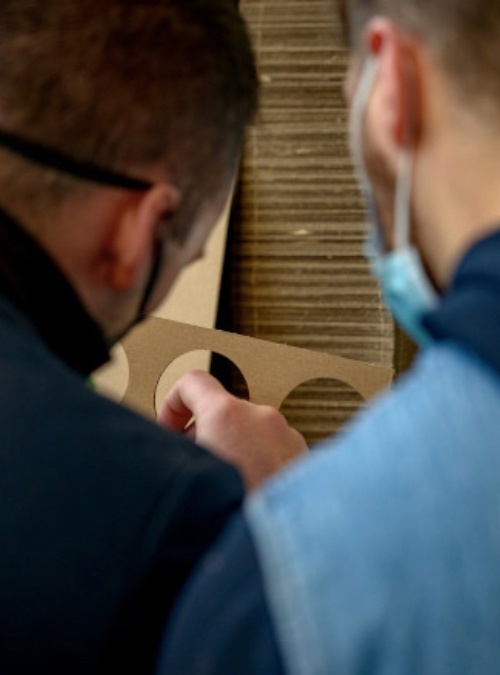 Through the EU-supported Regional Energy Efficiency Programme for the Western Balkans (REEP/REEP Plus), the KfW on behalf of the German Federal Government has supported the Serbian cardboard packaging manufacturer RVM in Kraljevo to rehabilitate a hall for its production, with a focus on energy efficiency. Previously, the company's production was spread over three buildings, so material and products had to be transported back and forth between the different units with forklift trucks. In addition, the old halls were in poor condition. In 2019, RVM therefore acquired a new building with 10,000 square metres of space, which, however, was also in need of renovation.

When their house bank, Unicredit Bank, presented the REEP Plus programme to the management, RVM recognised their financing opportunity through the Regional Energy Efficiency Programme REEP Plus, and they applied for and received a loan to renovate the newly acquired production building. The loan amounts to €250,000, plus an EU grant of €25,000 from the REEP pot. The company itself raised €90,000 from its own funds.

"With the help of the REEP Plus programme, we were able to implement the highest standards of energy efficiency," explains CFO Vladimir Radosavljević. "We will use the REEP grant to reduce the loan burden." New windows were installed, heat-insulating doors, the entire electrical installation was renewed and replaced with LED lamps as light sources. A dust extraction system was also installed, which significantly improves the air quality in the new hall. "Thanks to the funds from the loan and the grant, we did not have to compromise on building materials or energy efficiency," the manager emphasises. The subsidy thus enabled the company to make an investment that it would not have been able to make on its own. Nevertheless, it raised a quarter of the costs from its own funds.

In addition to the savings from the energy-efficient construction, there are fewer transport routes for raw materials, semi-finished products and goods, because all production steps are now united in the new building. Trucks and forklifts cover much shorter distances. In addition, there is still room for expansion of production. This will enable RVM to set up new production lines in the future. "Not only has fuel consumption been reduced, but occupational safety has also increased," emphasises Vladimir Radosavljevic. The risk of injuries is lower in the new hall with the optimised workflow than before. The CFO estimates the energy savings from the new hall at around 40 %.

"Companies like RVM in Serbia not only save energy with our help, but also significantly reduce their greenhouse gas emissions," says KfW Department Director Bianca Clausen. "And Serbian banks can build up important know-how through the programme, which contributes to strengthening the financial sector."

The WBIF project "The Regional Energy Efficiency Programme for the Western Balkans (REEP Plus)", is implemented by the European Bank for Reconstruction and Development (EBRD), the Energy Community Secretariat (EnCS), bilateral donors and the KfW on behalf of the German Federal Government. The REEP Plus comprises four components: in addition to the promotion of political exchange and interim financing, these are loans for the private sector and public administration. KfW is active in the latter two areas. So far, 597 projects have been promoted under REEP with a wide range of projects being financed, from the energy-efficient refurbishment of outdated production facilities to the purchase of modern tractors or combine harvesters in agriculture to the installation of energy-optimised heating systems in public buildings. As a result, energy in the amount of 51,000 MWh per year could be saved and greenhouse gas emissions of 15,000 tonnes per year were avoided.

The REEP Plus is identified in the European Commission's Economic and Investment Plan for the Western Balkans as one of the Flagship projects within the "Renovation Wave" under the Investment window "Clean Energy". These projects contribute significantly to the reduction of greenhouse gas emissions, and improve the living standards and health of citizens.

More about the WBIF activities in Serbia