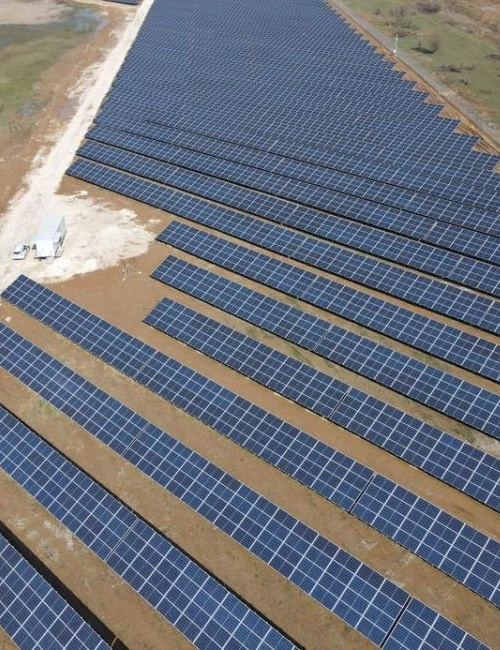 The first large-scale solar plant in North Macedonia ‒ financed with the support of the European Union, WBIF bilateral donors and the European Bank for Reconstruction and Development (EBRD) has been connected to the power grid and is already producing clean electricity.

The 10MW solar plant, built on the site of the spent Oslomej lignite coal mine, was constructed by the public company JSC Elektrani na Severna Makedonija (ESM). This is the company’s first solar plant in North Macedonia, developed with a view to diversifying energy sources and supporting decarbonisation. It is expected to produce nearly 15 GWh of electricity and displace 12,177 tonnes of CO2 annually. The Oslomej 1 solar photovoltaic power plant is part of a larger effort to clean up the site, diversify energy sources and support decarbonisation.

The €8.8 million investment is supported jointly by WBIF bilateral donors and the EU, in line with the 'Team Europe' approach. The EBRD provided a €5.9 million loan, complementing the bilateral donors' €1.6 million grant and national contribution of €1.3 million. In addition, Italy supported the project by financing the technical feasibility assessment.

The Oslomej 1 solar power plant is one of the 21 flagship projects in the Western Balkan region, selected for the EU financing in 2022 through the WBIF. The project has been identified as 'Flagship 4 - Renewable energy' in the EU’s Economic and Investment Plan for the Western Balkans 2021-2027.

Julian Vassallo, Deputy Head of EU Delegation, said: “The transition of North Macedonia from a coal dependant country starts today, by making a step towards the implementation of the Green Agenda for the Western Balkans, in line with the European Green Deal. This first phase of investing in 10MW solar photo-voltaic in Oslomej is a pioneer investment in renewables. Using solar power to create clean energy brings tangible benefits to the lives of citizens by reducing air pollution, while strengthening the energy security of the country.“

Andi Aranitasi, EBRD Head of North Macedonia, said: “The new solar plant will help the country, which faces severe air pollution from coal, to reduce its reliance on ageing coal-fired infrastructure. It will also generate cheap electricity in times of very high market prices. We are proud of this achievement and are eager to continue our work with the authorities to promote further decarbonisation in North Macedonia.”

Dimitar Kovačevski, Prime Minister of North Macedonia: "It is really a great pleasure to be here today, where once a big environmental polluter was located and now we are producing green energy. The benefits of this investment are manifold. Apart from the fact that with the annual production of this new photovoltaic power plant from 15 to 17 gigawatt-hours we will supply the needs of about 2,800 households with electricity, we are also doing a re-cultivation and improvement of 15 hectares of land. With this, as a Government, we show real concern for the protection of the environment. The project was well implemented and serves as an example for the future energy transition projects in the Western Balkans."

Kreshnik Bekteshi, Minister of Economy: "In line with the National Energy Development Strategy, in the next ten years North Macedonia plans to switch production from coal to renewable energy, leading to a modern, competitive and climate-neutral economy by 2040."

Vasko Kovačevski, General Manager of AD ESM: "The photovoltaic power plant Oslomej 1 is the first clean solar energy plant in the region. AD ESM has officially expanded its portfolio of renewable sources, and in addition to wind energy, now we produce electricity also from the sun."

In North Macedonia, even more additional investments in solar power plants are planned. The WBIF already approved financing for an extension of the plant in Oslomej 2 and the construction of a new plant in Bitola for a combined total capacity of 30MW. The EU is supporting this investment with a €5.1 million investment grant.

More about the endorsed Flagship projects in 2022

More about the WBIF activities in North Macedonia