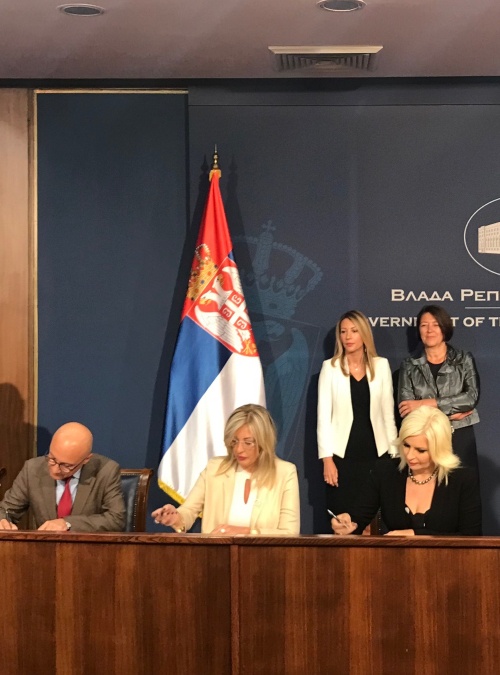 The EU investment grant over €40 million and an EIB loan worth €100 million for the section Niš – Pločnik were signed in Belgrade in the presence of the EU Commissioner for Mobility and Transport Violeta Bulc and the Head of EU Delegation Ambassador Sem Fabrizi. The other signatories were the EIB Director for Italy, Malta, Slovenia, Croatia and Western Balkans Miguel Morgado, the Serbian Deputy Prime Minister and Minister of Construction, Transport and Infrastructure Zorana Mihajlović, the Minister of EU Integration Jadranka Joksimović, and the Assistant Director of the Corridors of Serbia Dušan Purić.

The Orient/East-Med Corridor in Serbia and Kosovo includes the Niš – Merdare – Pristina E80/R7 road sections (approximately 110 km), called the “Peace Highway”. Strategically linked to Corridors IV and X, this road interconnection is of great importance for freight and passenger transportation in the Western Balkans as it is the region’s shortest route between the Port of Durrës on the Adriatic Sea and South-Eastern and Central Europe, as well as with the Mediterranean and Black Sea countries.

The total value of the construction of the first section between Niš (Merošina) and Pločnik (Beloljin) is €255 million. EU is contributing €40.6 million through an investment grant and €7.4 million in technical assistance. These grants complement the €100 million EIB loan and another loan over €80 million from EBRD, together with €27 million contributed by the Serbian government.

The existing road on the Niš (Merošina) – Pločnik (Beloljin) section consists of two lanes on a poor alignment and is irregularly maintained. It leads through urban areas, thus posing safety risks to the local pedestrians and moreover, causing major delays to transiting vehicles. The project now entails the construction of a 32 km long half-profile motorway, including several bridges, tunnels, overpasses and multi-level junctions (interchanges). It is the first (of three) road section of the Niš – Merdare – Pristina motorway to benefit from investment financing under the Connectivity Agenda through the Western Balkans Investment Framework (WBIF).

The project is expected to yield several benefits, including an increase in travel speeds of up to 100 km/h, substantial reduction of travel times and thus reducing the environmental impact on urban areas. It is also estimated that the annual average traffic will increase by more than 2,000 vehicles/day, bringing the daily traffic to around 8,500 vehicles/day within the first two years. More than 350 jobs are expected to be created during the construction, operation and maintenance periods and trade between the countries in the region is expected to improve, which will have positive impacts to the respective economies.

EU Commissioner Violeta Bulc: “Connectivity means prosperity, peace and hope. Through this investment in the Highway of Peace comes also the connectivity to ports and other modes of transport. It is very important to engage the countries in region to connect and manifest the benefits of the sustainable development that such cooperation fosters.”

EIB Director for Italy, Malta, Slovenia, Croatia and Western Balkans Miguel Morgado: “This project is a good example of the blending of the EIB loan with the EU investment grants through the Western Balkans Investment Framework. We continue to support infrastructure projects in the region, to foster growth, prosperity and the EU perspective of Serbia.”

Deputy Prime Minister Zorana Mihajlović:“We are signing today two very important agreements, which are the results of three years of hard work. It is one of six highways Serbia is starting to build this and next year. This highway is strategically important for our country, as it will connect Serbia with the Albanian ports on Adriatic Sea. Moreover, this project is not only important for economic reasons but also carries strong political connotations, showing our commitment to connectivity in the region.”

The Serbian Minister of EU Integration Jadranka Joksimović: “Investment in the infrastructure is always a good investment. Roads mean better connectivity, higher growth and more employment. This is made possible through the significant EU grant of €40.6 million from the Western Balkans Investment Framework, while the rest of the funding is covered through a favourable credit line with our partners at the EIB partners.”