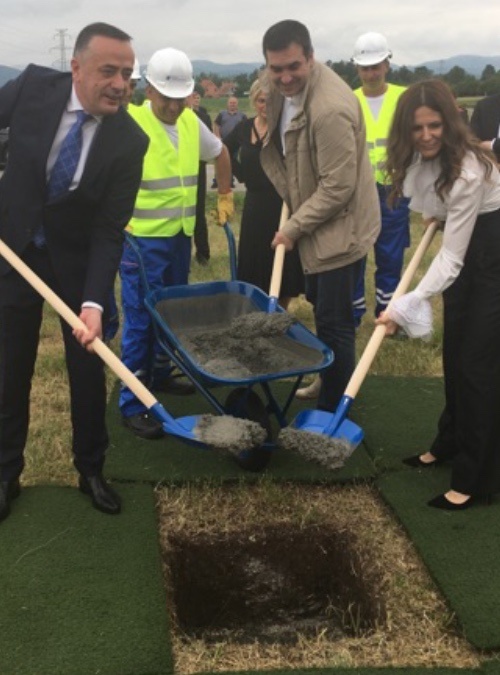 In Kragujevac, the cornerstone was laid for the 400 kV transmission line Kragujevac - Kraljevo, investment worth €13.5 m, which will enable a more stable supply of this part of Serbia. This is the second section of the first phase of the Trans-Balkan Electricity Transmission Corridor, which will connect the markets of Eastern and Western Europe.

The EU-supported project Trans-Balkan Electricity Corridor: Grid Section in Serbia (Kragujevac – Kraljevo), is of a particular national and regional significance. The power transmission corridor will enable a secure and stable power supply to the customers in Serbia and the neighbouring electricity markets. It concerns the construction of the 60-km long transmission line, the upgrade of the substation Kraljevo 3 to 400 kV voltage level as well as installation of a 400 kV feeder bay to the substation 400/110 kV Kragujevac 2.

The total investment value of the section amounts to €29.6 m. The construction contract was signed on 24 March in the midst of the Covid-19 pandemic. The financing is secured through the Western Balkans Investment Framework (WBIF), namely a €6.5 m EU-grant, a €15 m loan by the KfW and a own-contribution over €8 m from Electricity Transmission System Operator ‘EMS JSC’.

These much needed investments will replace the outdated network, which is prone to system failures and shows high operational and maintenance costs. Once complete, security of electricity supply will greatly improve for over one million residents of Zlatiborski, Moravički, Rasinski, and Raški districts who are now connected, via 220 kV lines, to the hydropower plant of Bajina Bašta and the 400/220/110 kV substation in Niš.

This project contributes to the establishment of a Trans-Balkan Power Corridor that would connect the electricity transmission systems from Serbia, Montenegro, Bosnia and Herzegovina to Croatia, Hungary, Romania and Italy through either 400 kV overhead lines or submarine cable.

Aleksandar Antić, Minister of Mining and Energy of Serbia: ‘This project means a lot to Serbia as part of our power system and the region, because it connects the east with the west, from Ukraine to Italy, and thus creates opportunities for further development energy projects and electricity trading options.’

Jelena Matejić, Director of AD Electric network of Serbia: ‘Besides stable supply for the citizens and the industry, and the future financial benefits for the country, such projects bring also new jobs and a better life for our people. Besides, this endeavor also contributes to global climate protection by reducing carbon dioxide emissions, as it will bring significant reductions in electricity losses.’

Arne Goss, Director of KfW Office in Serbia: ‘In the future, when the other four sections related to this project are erected, the entire system will ensure a stable electricity supply in western and central Serbia for more than a million consumers. It will represent a vital connection between the transmission system of the state and the entire region, which will increase cross-border capacities and thus contribute to the integration of electricity system of Serbia into the European network.’

The Kragujevac – Kraljevo section is on the list of Projects of Energy Community Interest, being located in one of the Energy Community Treaty Contracting Parties (Western Balkans countries, Moldova, Georgia and Ukraine). It will upgrade the electricity distribution system in Central and Western Serbia and inter- connect it with systems in the neighbouring EU states.

More about the Project here.

More about the WBIF activities in Serbia here.