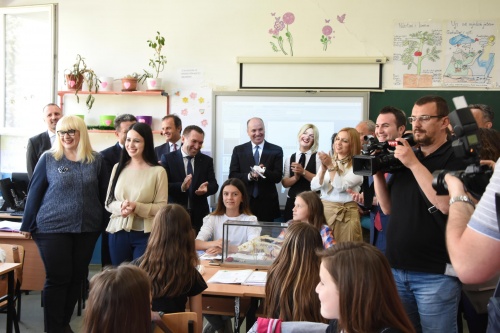 Prof. Dr. Renata Deskoska, Minister of Education and Science in North Macedonia, together with representatives of the WBIF Bilateral Donors, the European Commission, and WBIF International Financing Institutions (IFIs) visited the “25 May” School in the Municipality of Gazi Baba. The school was refurbished as part of a larger rehabilitation project initiated by the Ministry and supported by €3 million in grants provided by the WBIF Bilateral Donors and two loans from the Council of Europe Development Bank in total value of €42.5 million. Specifically, the project concerns the construction of 70 physical education facilities and the rehabilitation of more than 60 primary and secondary schools throughout the country. Most of the rehabilitation works are now complete; savings will be used to purchase furniture and equipment up to the end this year.

The WBIF Bilateral Donor grant support has enabled the refurbishment of ten primary and six secondary schools. “25 May” is one of the ten primary schools. Built in 1967, it currently accommodates about 1,500 students, aged 6-14. Prior to the WBIF support, no significant refurbishment activities had been carried out. The school benefits now from new roof, facades, windows, toilets, floor surfaces, and heating system.

Mr Fadil Murtezani, the Principle of “25 May”, stressed the importance of the infrastructural investments in the school, particularly as, in addition to providing a safe space for children, the WBIF grant freed up resources for modern, digital teaching aids. The pupils could thus start on equal footing, particularly in terms of digital skills, with those living in the European Union. Mr Murtezani thanked the Bilateral Donors for their contribution.

Mr Emmanuel Rimbert, Director of Institut Français de Skopje, iterated that France is happy to act as the Co-Chair of the WBIF in 2018 as well as keen to continue supporting projects which would enable the sustainable development of the country, such as the one that led to the rehabilitation of the “25 May” School.

H.E. Thomas Gerberich, German Ambassador to Skopje, explained, in brief, the nature of the WBIF and Germany’s contribution thereto as well as specifically to the former Yugoslav Republic of Macedonia. His Excellency also praised the project and the excellent performance of “25 May” students.

H.E. Carlo Romeo, Italian Ambassador to Skopje, reiterated the fact that Italy was amongst the first Bilateral Donors to come forward and mobilise resources under the WBIF in order to address the needs of the region. The rehabilitation of the “25 May” school represents a concrete example of a successful project in the education sector, which was made possible by the cooperation mechanism set in place under the WBIF. Italy will continue to support such initiatives as well as the country’s negotiations with the EU.

Mr Johan Willert, Deputy Head of Unit and Senior Adviser with Swedish International Development Cooperation Agency, congratulated the project team on putting forward an excellent example of providing equal opportunities for Macedonian boys and girls. Mr Willert indicated that Sweden is currently programming their further support to the country, in addition to continuing to contribute to the WBIF, while social and environmental initiatives are particularly encouraged.

Mr Wolfgang Schlaeger, Head of Sector with European Commission, found the visit inspirational as it clearly demonstrated the importance of working together when faced with significant challenges, such as EU integration. The European Commission and the EU community is however committed to assisting throughout the accession process and hopes to meet  the “25 May” students again as (immediate) EU citizens.

All the speakers congratulated the Government on the progress made to date on the path to EU integration and stressed the need to continue with governance reforms as well as to improve the prioritisation of strategic investments which would drive the country’s sustainable growth and EU accession.

Minister Renata Deskoska thanked the WBIF for their support and clearly outlined her commitment to continuing with the rehabilitation of the schools with national resources as well as with those made available by the Council of Europe Development Bank.

Mr Miles Raguz, Principal Country Manager with the Council of Europe Development Bank, thanked the Minister of Education and the “25 May” School for hosting the event as well as expressed CEB’s commitment to continue to support the country’s development agenda. He also praised the Bilateral Donors’ contribution to the WBIF, particularly that of its largest providers, such as Norway, Sweden, Austria, Germany, and Italy.

More details on the school rehabilitation project are provided here, while specific information on the works carried out in the case of “25 May” school have been included here.