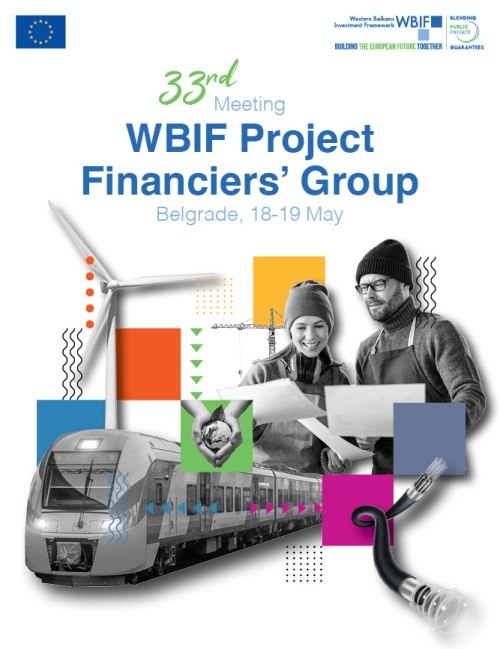 On 18 and 19 May 2022, the Western Balkans Investment Framework (WBIF) held its 33rd Project Financiers’ Group Meeting (PFG), for the first time as in-person meeting (with remote connections for those unable to travel), after the two years of pandemic.

This meeting was attended by over 100 participants from the European Commission, financial institutions (EIB, EBRD, CEB, KfW, WBG, EIF and IFC), the Bilateral Donors’ WBIF Co-chair Italy, all six Western Balkan beneficiaries and the Transport Community.

On the first day, the PFG public sector session discussed the outcome of the screening and assessment of TA Round 27 and the first Private Sector Round. All in all, 9 TA projects were screened and assessed positive, for a total grant consideration of just over €15 million.

Participants were also informed about status of the ongoing Investment Round 7, which will be re-opened to allow further applications under the investment priorities Clean Energy specifically for renewable energy production, and Environment and Climate, focusing on the Green Agenda.

On the second day, the PFG policy and strategy session was co-chaired by DG NEAR and the KFW Development Bank. Participants learned about the need to accelerate implementation and respective key milstones were fixed for 2022. The 5 year rolling plan for the extension of the TEN-T networks was presented by the Permanent Secretariat of the Transport Community, and the KfW together the EBRD presented the impact of the energy crisis in the Western Balkan economies together with a proposal of short and long term measures addressing energy resilience.

The European Commission presented also the planning for the call for proposals as well as the new WBIF Communication and Visibility Plan 2022-2023.

Part of the programme included a site-visit to the ICT Hub in Belgrade, organised by the EBRD. The ICT Hub receives support from the Star Venture project, co-financed by the EU Instrument for Pre-accession Assistance through WBIF.

The Project Financiers’ Group meeting offered the opportunity to present the architectural design for the new campus of the Electrical Engineering and Technical Faculties in Belgrade. The design of the campus has been developed with WBIF contribution in the framework of the Council of Europe Development Bank investments in support of universities in Serbia.

On Thursday, 19 May another high-level visit to the WBIF project was organised during the visit of the European Council President Charles Michel. An agreement on the joint EU/World Bank project called “Serbia Accelerating Innovation and Growth Entrepreneurship” (SAIGE) was signed at the ocassion of visit to the Zvezdara Technology Park, a project financed through the Western Balkans Investment Framework (WBIF).

The agenda and presentations for this meeting can be found here.